Tell us a little more about yourself.
QH: I’m a potato… I don’t know! What do you want to know?

What made you decide to stay in KE?
QH: My parents… My parents were from KE, and they said that it’s a “legacy” thing, and I must stay in KE, and I was like okay yeah, sure.

Describe how hall life has been like in one word, and why would you pick that word?
Russell: Potatoes.
QH: One word…? One word… Actually if I had to pick one word, it would be “potatoes”.

Russell, you need to stop ruining the interview!
QH: No, I have a legit explanation… it just sounds really bad in an interview. See, when you have a potato, your potato can become anything. So, your hall life can also become anything, it can be like mashed potatoes, or fries, or – or chips! Everything that I can’t eat, because I’m in Cheer. So hall life can be anything and everything, just like a potato!

What do you feel is the biggest takeaway from hall life? (And please don’t say Russell or potatoes.)
QH: Definitely not Russell, because you can’t take him away. He’s not dabao-able. Hmmm… I think I learnt to just chiong, just whack everything. A lot of people have asked me how can I handle so many hall commitments and still manage to study, but I feel that once we go out to work we can’t do all this hall stuff anymore. Of course it’s important to prioritise schoolwork, but if you come to hall and don’t take part in the activities, then you’re wasting the experience.

The moment you join you feel regret.
Russell: Die!
QH: One piece of advice… I would say if there is one thing that you really wanted to do but never had the chance to before, just go and do it. Like cheer. I’m scared of heights, but I still joined cheer anyway. Just join anything you want to, then if you feel like after one month you really cannot make it, then you just quit. I mean, as long as you try, and you don’t really need to have experience to join CCAs here. You can just try out, and you either get better at it, or you can just drop out.

Erm, okay. Your cheerleading friends want to know what your favourite CCA is.
QH: Ooo, that’s great. I spend most of my time at cheer, so…

Cheer’s your favourite?
QH: I guess.
Taylor: That is a very good answer!

You don’t have to feel obliged to answer that just because of present company.
Russell: Hmm, I wonder who gave you that question.
QH: I think that cheer and dance are about the same, I like the both of them equally. I spend about half my time at cheer, half my time at dance, and then five minutes for sleep… And maybe five minutes for studying.
Russell: Just say cheer.

Another one: who is the most handsome guy in cheer?
QH: Woah… Let me think. [Turns to Russell] You’re not handsome, you’re pretty! …Can I not answer this, what if it breaks their hearts and they quit cheer… No comment!

Russell: Next question, what CCA will you recommend freshies to join?
QH: Cheer! I want guys…

It’s called a nanny.
QH: It’s called a babysitter.
Russell: …I feel like I’m paying ransom to a baby kidnapper.
QH: But you know exactly where they will be!
Russell: So you take my babies and you’re like “I want money, if not I’m going to leave your babies somewhere after I’m done playing with them.”
QH: Hmmm, yes. I don’t even know what the question is anymore.

I didn’t ask the question, Russell did! I don’t even remember what it was anymore.
Russell: What CCA she wants the freshies to join, then it degenerated into her stealing my babies.
QH: No, I said I want guys, but not that way! We need guys… or really buff girls.

Last question, how much do you like potatoes?
QH: A lot! Someone once gave me a potato for Christmas, but it grew mold and I had to throw it away and I was so sad. I thought I could keep it forever, I didn’t know potatoes grew mold!
Taylor: That explains why you’re in Arts and not in Science.

…How long did you keep it for?
QH: Three weeks, then I started wondering why my potato was turning green, and I got really sad when I had to throw it away. I couldn’t keep it forever.

…I think it’s safest if we conclude the interview here.
QH: I think they’re going to regret including me in FOKE! 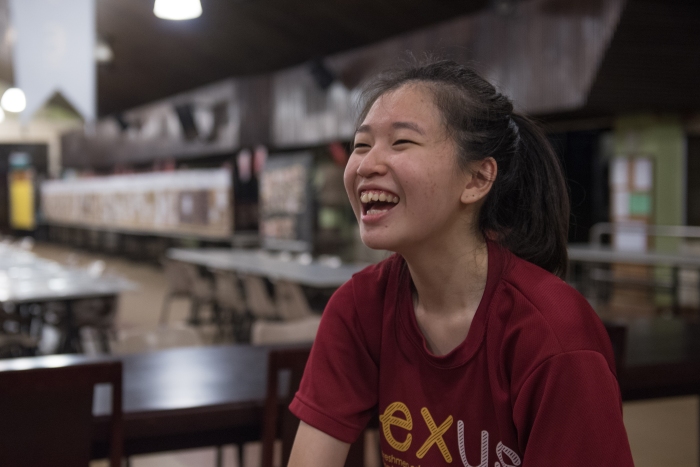