One of KEVII’s biggest events of the year started off in the morning on 19 March, and many residents, alumnus and family members came for the celebration of the 100th anniversary of King Edward VII Hall. The organizing committee came up with a rather interesting pun for the name of this year’s carnival: C@KE – Carnival at King Edward VII. One would be spoiled for choice at C@KE – there was a whole range of activities one could participate in! Food, games and performances put up by our very own residents – our block committees and the culture CCAs. The SCRC had so kindly sponsored complimentary tickets for existing hall residents. It was also very heartening to note that there were many more tickets bought by the residents themselves! Profits from the carnival will go towards supporting needy residents with the KEVII Bursary.

So the carnival shall begin!

All excited for the ribbon cutting ceremony!

Excited faces could be seen venturing into the room to have a peek. The heritage room proudly exhibits KEVII’s history and achievements over the past 100 years. Plastered on the walls of the room are stories on how KEVII was named, how our mascot came about, our significant milestones, and other details of our rich history. Simply being in the room stirred up waves of nostalgia in many of our alumni.

The KEVII Choir kicked off the series of performances with three songs, the first being a ‘Medley of King Edward VII Hall songs’. The song most certainly tugged the hearts of many ex-residents as they reminisced about the days of yore when they used to reside in the Hall. The choir then sung with ‘Ecce Homo’, the theme song for the television series ‘Mr. Bean’ and wrapped up their outstanding performance with ‘Wherever you are’, a piece written by the wives of American soldiers who have left their home to fight various wars.

KEVII Choir bringing a wonderful start to the series of performances

Another highlight of the day was our alumni band, the Smoking Marshalls, consisting of Bryan and Yannick on the guitar, and Sheikh as the lead singer. The Smoking Marshalls was formed six years ago and they continue to play for concerts to this day even though most of the members have graduated. Some interesting trivia: the band’s name was inspired from an incident where one of the guitarists, Eugene, ‘smoked’ one of the marshals at a concert they performed at. The Smoking Marshalls put up an awesome performance with the following line-up: Rude (Magic!), She’s Gone (Steel Heart), Happy (Pharrell Williams) and Careless Whisper (George Michael).

Sheikh introducing to the band to the audience

It was very apparent that the audience enjoyed the performance, clapping with gusto to the songs and cheering loudly, especially when the Sheikh screamed (in a musically coherent manner, of course) into the microphone. The applause Smoking Marshalls received at the end of the performance was most truly well deserved.

Singing with style and great poise

Even before KE Titans took to the stage, members of the audience could already be heard yelling “Go Titans!” Cheerleading has always been a key highlight that KEVII residents look forward to in performances – the Titans never fail to deliver a spectacular display of agility, teamwork and slick moves. During the performance, constant cheers from the crowd can be heard as KE Titans breezed through many difficult stunts, including tosses, splits and back-flips. After the performance, loud cheers filled the hall and hugs were exchanged – it was clear that the audience was very thrilled with the routine.

Try this at your own risk!

After the performance ended, the audience shouted “Encore! Encore!”, in hopes that the KE Band would perform another song. The pianist, Vivien, chirpily disappointed the audience by telling them that they had to wait for the band’s next performance later in the day.

KE Band livens up the audience

Wushu put up a magnificent display consisting of their elegant moves synchronized with the traditional Chinese music. Their elegant form and excellent control of their bodies, along with beautifully choreographed fight between the spear and the knives certainly energized everyone present. 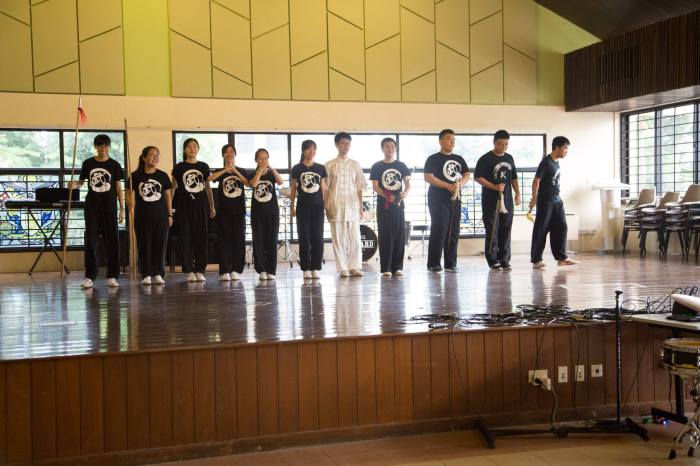 KE Band appeared on stage again for the final segment of the programme as promised, but this time round with Russell (Lead + Guitar) Gabriel (Piano) and Shalom (Cajon). The band chose three songs – The Ballad of Mona Lisa (Panic! At the Disco), Speed the Collapse (Metric) and Something I Need (OneRepublic). KE Band ended the series of performances on a high note with the fabulous medley of songs.

There were booths set up at the foyer and dining hall for everyone to fill their tummies and have fun! One of the highlights was the dunking machine where residents who arrowed one another volunteered themselves to be dunked by others. Bobo shooters of the hall were revealed here and all in all, it was really a time of great fun! 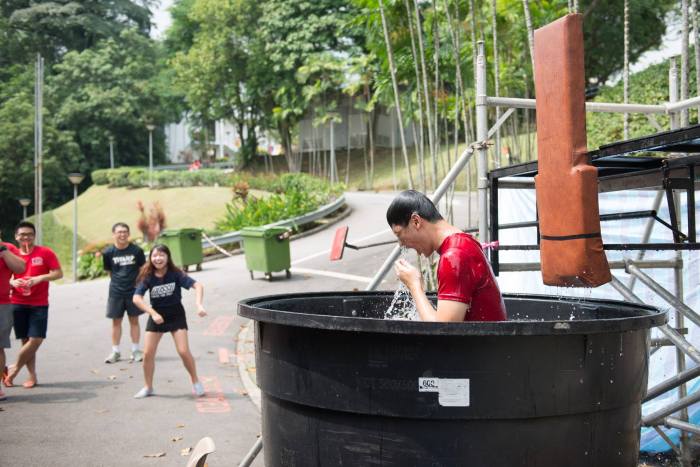 Kudos to the block committees in designing the game booths! 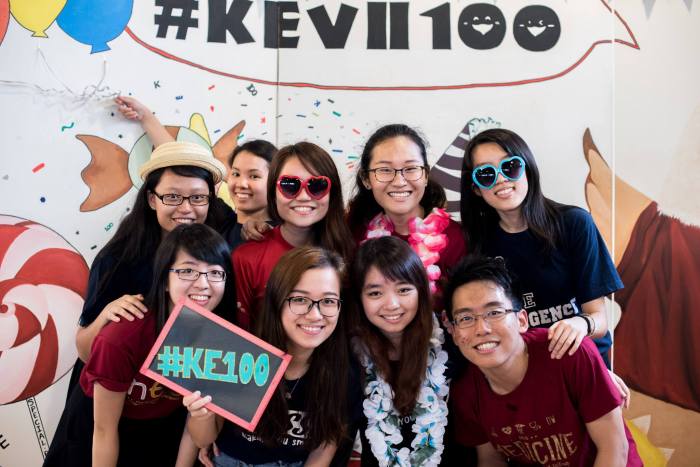 Behind the scenes, our special project committee had put in a lot of effort to make C@KE a success. KE Press had managed to speak to Victoria, the organiser for this event and she would like to express her gratitude to everyone who was part of the event by saying:

“I want to thank my special projects committee, the 59th JCRC, the block committees, the cultural CCAs and the emcees for their hard work and effort throughout the event. They have worked hard to make this event a successful one! I also want to express my gratitude to the SCRC for supporting the event and sponsoring complimentary tickets for the hall residents. Of course, let us not forget our residents and alumnus who took time off their busy schedule to go for the carnival. I hope that everyone had fun and it was most certainly a wonderful celebration for KEVII’s 100th year!”