Tell us a little more about yourself.

I’m Kim Mijin, I’m from SOUTH Korea, and I’m kawaii! Everyone in my block keeps on making fun of me saying I’m from North Korea. I’m in Environmental Studies, it’s a relatively new course. I’m the programmes head for KEWOC. I’m also in cheer and AB block comm. I like cats, and I have a soft toy zoo. I also like Disney princesses, food, sleep, and I also like Taylor-senpai! 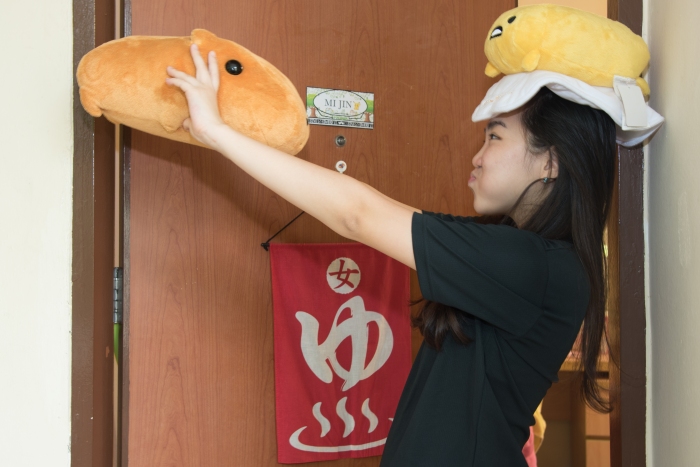 Kapibara-san leans in for a smoochie

Firstly, explain the Japanese spa in your room and also the presence of a stuffed toy zoo.

I just thought it would be funny to hang the Japanese bath house sign on my door. Then, my friend came to my room and was like, “Does it promise hot, naked Japanese girls inside?” and –

A girl! And I was like “Yeeeeah!” The soft toy zoo is because I love soft toys from Japan. I collect them, so some of them – six – are here.

You can’t bear to leave them at home?

Why did you choose to stay in a hall, and why did you pick KE?

I chose to stay in hall because I live really really far away. I thought it would be a good experience as I wanted to try a lot of new things. Erm… why KE? It’s because you can lepak, you can study, and you can make friends. But in the end, I didn’t get much studying done.

It’s been quite fun, so far. A lot of ups and downs, and there is something about being with your friends all the time, 24/7 that is quite special. As for interesting events… maybe Night of the Arts? When I had my first cheer performance.

How does it feel like to be the progs head of KWEOC, knowing that you are going to play a large part in impressing the freshies next year?

So far, we haven’t really started on much work… yet. But I think it will be fun. I guess that it’s exciting that I’m the one who will plan and make KEWOC awesome for the next batch of freshies… and hopefully improve on from this year’s KEWOC.

Since we’re on the topic of freshies, is there any advice you want to give people who are moving into hall either next sem or next year?

Don’t jump into a relationship.

You speak like you have a lot of experience.

I speak with… very little experience. Another thing is: attend lectures, don’t be like me! Also, really put yourself out there and try and involve yourself in CCAs and groups of friends. I mean, since you’re in hall, might as well make the most of it, right?

Right. So what do you feel is the biggest takeaway from hall life?

I think it’s the friends that I make in hall. I feel like they’re a very big support, and they make my everyday life more fun. And also the skills that I learnt from CCAs, such as interpersonal skills, yeah.

Is it the Kokliang one? Why you never ask me about Kokliang.

I’m going to ask you about Kokliang! That’s the last question. But since you brought it up, tell us more about what’s going on between you and Kokliang.

Nothing is going on between me and Kokliang! 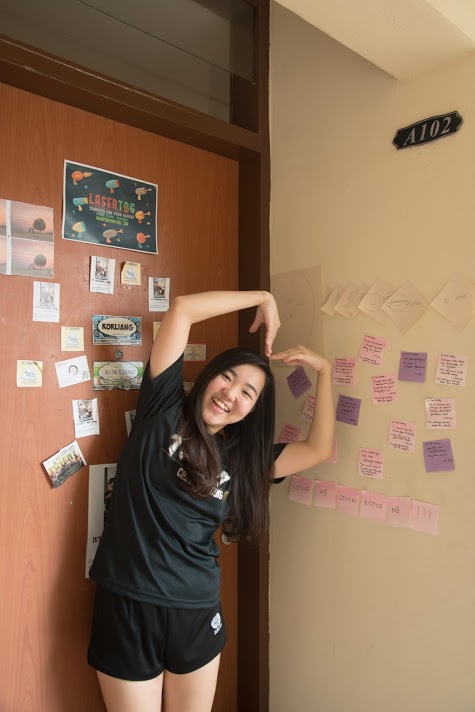 Well, then how did this start?

So in my block, the guys like to make fun of Kokliang, so I just joined in their “fan club”. And then two days before the ABCD supper, I still had no date, so I was like “shit”, so I went and wrote on Post-it notes and pasted it on his door. Since he was in his room I was like “Kokliang! Will you be my date?” He didn’t want to initially, but I managed to whine him into agreeing. But on the day itself, he didn’t want to play the games. He was hanging out with his friends and didn’t want to spend time with me so I was very sad. I had to date my “girlfriend”… a female friend. I took the effort to ask him out and all his friends laughed at me, I’m never asking him out ever again ):

Well, we’re done! Unless you have more things you want to add.

Do I get anything for coming for this interview?

[Taylor: You get hall publicity.]

I get hall publicity and free photos!

[Taylor: You get to rule over KE, one step at a time.]

Basically, being a queen is not good enough.

Yeah, queen is not enough. After KE, I’ll rule over NUS. After NUS, it will be Singapore… After Singapore, it’s the world!

… Are you sure you’re not from North Korea…?