Singapore doesn’t exactly have the best weather in the world. Of course, it is by no means the furnace that is the Death Valley in July, but to exert yourself chasing a ball or running the distance, there is no wish more fervent than to have some air conditioning. It was one of those blissful moments in the year on Monday night, when cool air was bestowed upon those in the Communal Hall on the first day of the Inter-Block Games.

At 6:30,  a few of the more table-tennis-savvy seniors gathered and started setting up the tables and the barriers. Blank score sheets lay on the stage waiting to be filled up, while the seniors began reminiscing the days when all they had to do was to show up as a freshman. 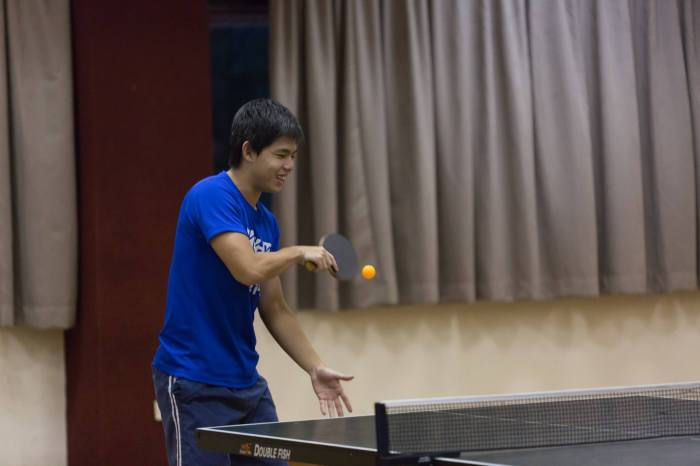 More and more were strolling in at 7, and the tables began filling up. As is the trend with most IBGs, there were mainly two types of people. The ones with their expensive Butterfly bat sleeves, their expensive Yasaka rubber and their veteran swagger; and the fellows to whom the Ping-Pong balls seem like one of those misbehaving cats on YouTube — the usual formula for fun.

It was another 15 minutes before the popular captain of everything, Koh Zhao Ming, announced the commencement of the games. The helpers started scrambling and giving out score sheets, as the crowd got ready to watch in awe the ones who played well, and laugh hysterically with the ones who didn’t. 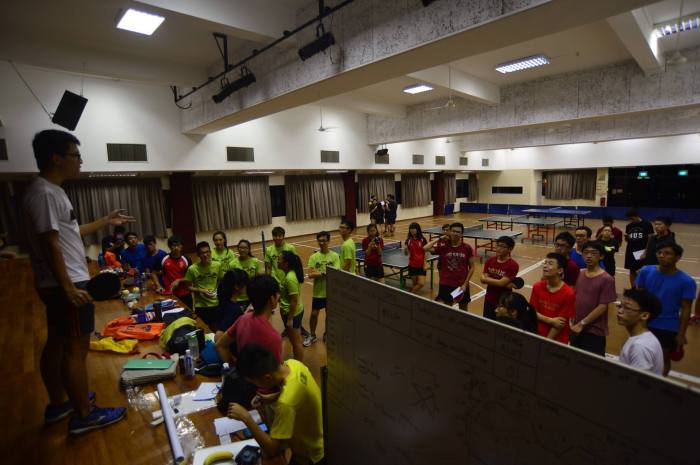 The first matchup of the night. (incomplete sentence) AB Block sent Zheng Jie against GH’s very talented Joshua Tan. From the warmup, it was apparent that both players were trained at their trades. Between such adversaries, the warmup is never just a warmup as both athletes tried to feel out the other, searching for weaknesses to exploit. Despite sharing a name with one of Asia’s most prominent tennis players, it was Joshua who did a better job at that as he outlasted Zheng Jie in many exchanges and hit impressive winners in others. The game ended 2-0 (11-6, 11-5) in favour of Joshua. 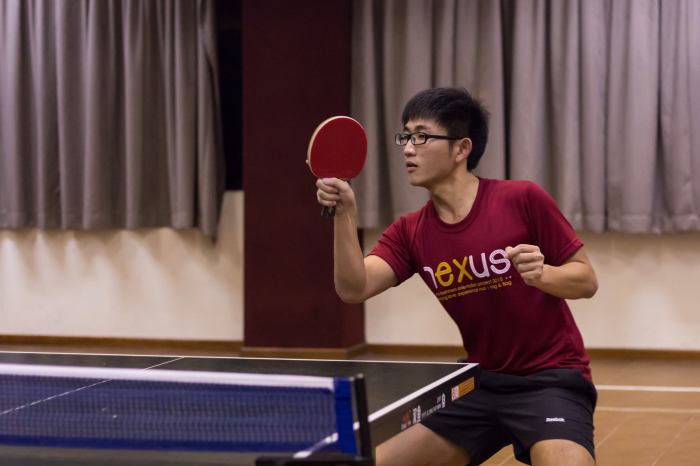 Joshua Tan loops a forehand (with the aforementioned Yasaka rubber).

On the doubles’ side, it was Nigel and Zhao Ming versus Alexander and Yu Jin. With the freshmen relatively new to the rules of table tennis, the seniors patiently explained as the game went on. The game was rather reserved, with each player mostly nursing the ball over the net.The occasional showboating smashes came when scores started to skew away from their control. Though it ended 2-0 (11-2,11-5) to GH, it was one of those matches where exposure to the sport and new friendships mattered more than the competition.

On the girls’ side, it was a one sided victory for Qian Qian of AB, as she only allowed three points to be taken by Tan Wei in two games, serving up a brutal 11-2, 11-1.

GH block’s Jolin/Xin Tong, and Vivien/Jason each won their matches against AB’s YiJun/Zhang Yao and Dean/Evelyn, accruing four wins for the block, giving GH a win of 4-1 over AB. 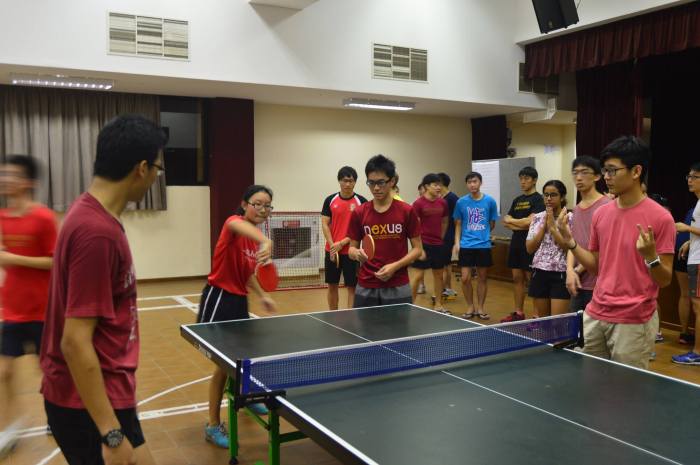 Last year’s Inter-Hall Games was not the men’s table-tennis team’s best moment, as they weren’t blessed with the overflowing talent of the women’s team. While, of course, having fun and enjoying the game was important, the losses were disheartening nonetheless. For the rest of the year, the glorious banners in the dining hall reminded us all of the painful meaning of “陰盛陽衰” (stronger women and weaker men).

But what goes around comes around; last year’s suffering may have brought us better fortune this year, as in the freshmen we saw great talent. Proof came in the first match between E and CD, not unlike that between AB and GH. Li Yang and Jing Yee managed to produce some rallies of commendable quality, but one eventually outplayed the other, as Li Yang emerged victorious after relinquishing only four points in each game. 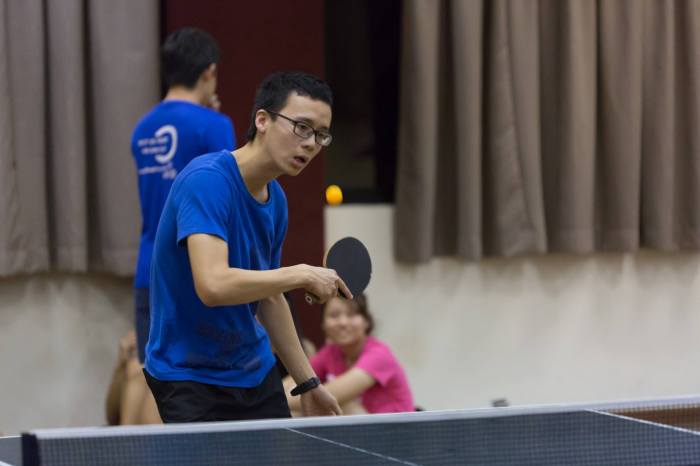 Li Yang is one with the spin

Eight points in two games might seem few, but the girls’ singles match proved it merciful still. Cherie of CD cruised past Jin Ching of E block in ruthless fashion, having an answer for everything that Jin Ching threw at her. She only gave away a stingy one point in the first game and two in the second.

Not long afterwards, CD won the matchup with a score of 4-1, proving themselves to be a serious contender.

Four of the five blocks had flaunted their abilities by this time, with only F block yet to join the party. They arrived in impeccable fashion, with Chuan Hao casually displaying his ping-pong prowess in some simple, fast forehand rallies. It was much to GH’s delight that he chose to play doubles, which gave Joshua and Yu Jin of GH a good glimpse at taking a point off an IVP-associated player. It was one of the rare intense games of IBG, where everyone at the table understood what long pimples were. After many oohs and ahs of frustration and excitement, it was the players of GH who edged past Chuan Hao and Brandon 11-7, 11-9. 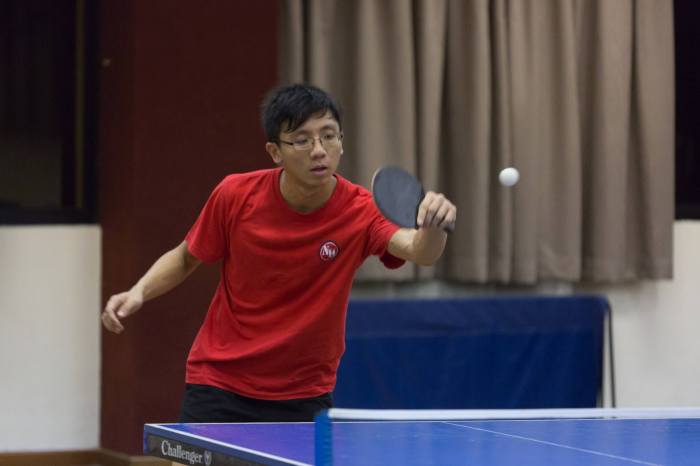 With GH’s Qi Dong winning his singles’ match against Nam Cường, GH appeared to be going on a streak. However it began to go downhill as female captain Siow Ying’s presence in the doubles match meant that victory was assured. The win lead F block to eclipse GH with a score of 3-2.

The rest of the night ensued in similar fashion. A spectacle only IBG can provide – a somehow harmonious mixture of fierce, high-level competition and hilariously amateur attempts at getting the ball over the net. As the night went on, it got more and more difficult to keep up with the scores. Yet no matter the calibre or how the matches were going, it was always easy for the crowd to find a way to enjoy themselves. 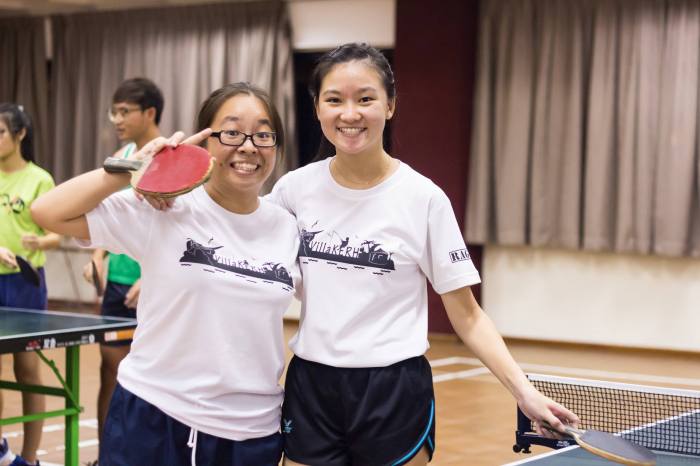 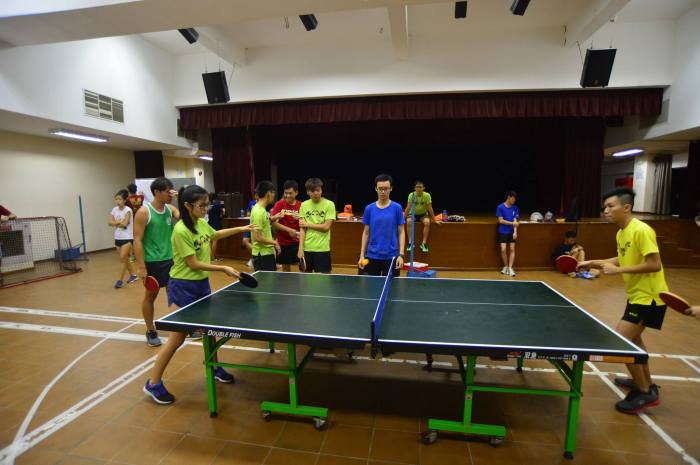 In the end, though, F block emerged victorious (to no one’s surprise), with CD block coming in a close second,. GH, AB and E took third, fourth and fifth place.