We speak to Jerrard Williams and Samantha Goh, the Pageant Contestants from GH Block, to find out  a little more about them and their journey leading up to DnD and Pageant.

Thanks for being here, maybe we can start by introducing yourselves?

Jerrard (J): Alright, I’ll go first, I’m Jerrard Williams, year 1 chemistry staying in GH. About myself, I’m actually a quiet person. It’s only this year where I’ve tried many things that I’ve never tried before, for example, floorball, handball and things like being in the Block Committee, and being the Head Producer of Amplitude… and along with Soccer and Road Relay, which I’ve done before.

Samantha (S): Wah you got a lot of CCAs ah. No wonder you won Freshman of the Year.

Lol, I’ll ask you about that later

J: Yea. For a normally quiet person, to join DnD Pageant is quite…. Hmmm… I won’t say it’s a challenge, but it’s something new, something once in a lifetime. Because I guess there won’t be any more such of this already.

S: Alright.. I’m Samantha. Year 2 Medicine. Some of my Medicine friends know me as Marmantha. And..

J: Many people call her that instead of her first name..

S: Yea. Actually there was once this junior of mine that thought Marmantha was my actual name. She thought my birth cert actually said Marmantha.

I think this was also a very hectic year in hall for me. I never thought I’d be in Pageant, until Kah Mun approached me. “Okay. Sounds like fun, yea let’s do it man.” And here I am. Before that, I already had quite a lot (of CCAs and other commitments) already, but looking back I don’t regret it at all, I think it’s quite meaningful

What’s the history with your nickname, Marmantha?

S: Cos I still have my Chinese name

You have a Chinese name?!

J: There are even the Chinese characters written there.

Indeed there was. I began to be so fascinated in the physical appearance of Jerrard’s IC. That I begin to lose track of the interview and all that.

S:  Mine is like, Marlene Samantha Goh Sze Minn. So yes it’s preettyy long also la. But maybe lose to him.

S: Back to Marmantha. Basically it happened in secondary school when one of my friends wanted to call me by my full name. By the slip of her tongue, she “shortened” my name, and it became, like, Marmantha! Since then it stuck because it’s quite catchy, and I used it for my usernames and stuff. When I came into Medicine, some of my Rag friends started calling me Marmantha. Then the Rag Juniors called me Marmantha. And then, Ta-da! That become my nickname. In fact, even some of the hall people call me Marmantha

How has Pageant been so far?

J: Welllllll, for me, personally, we’re still on a journey of getting to know each other. Because for me, at the start, she’s known as Marmantha also known as Shawn’s Girlfriend. You know, during the photoshoot…

S: I think he stress, sia

J: A little bit, like I’d be thinking to myself, “Hmm is this too much” that kind of thing. Initially it was quite overwhelming, especially during the photoshoots, when Shawn would be there, advising us and all

S: But then Shawn would be advising (Jerrard) on how to pose.

J: He’s advising, but I’d be getting more stressed. By his… presence.

S: Like, he’d tell Jerrard, why don’t you pose this way, or that way? Then Jerrard will be like, “Huh?! What!”

J: I’d always be wondering, “Wait. Is this a trap for you to get me into trouble?” or something like that. Slowly, as the year goes, I realised that we’re all just doing this for the experience and the fun and there’s no need to get too worried about this sort of things. Everyone in Hall would understand what we’re only doing this for. Which is why one of our photos happens to be at the well…

S: The lifted one.

Reproduced here for your easy reference. 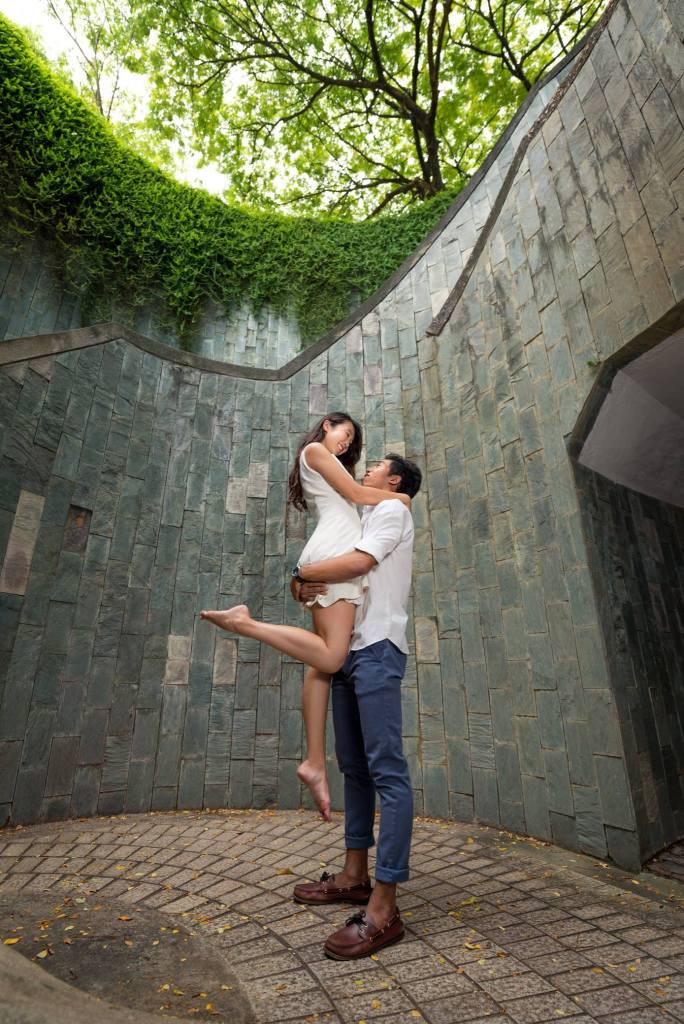 It becomes clear what Jerrard’s apprehensions are.

S: For me, it’s been fun. But I felt the photoshoots are very unnatural. It’s so weird to pose. Then you’ve to pose in a specific manner. That’s even weirder because it’s so unnatural. But I guess it’s part and parcel of it. Then we got to the outdoor shoot, which I thought was more fun because there’s less people watching you and you’re out in the elements and you can just get lost in it. Now, we’re trying to perfect the dance…

J: The dance. For me, as a non-dancer. All the twisting movements, for me I’m not really good at it, but I’ll just try.

You’ve danced before right, Jerrard, like at open day?

J: That… I was in the last row. So I always told myself that if I made a mistake no one could really see me. I could smoke my way out. But not now.

S:  For me, I dance, but I find that this Pageant dance (has) super a lot of turns. Then I keep turning turning turning until I become super giddy. But nevermind la I’d just go along with it. .

Anything else you’re looking forward to for DnD?

S: I am very interested to see F Block’s Chemistry.

J: Yeah! Looking forward to a good show by everyone.

J: The thing I like about this is that we all go in just for the experience and not for any expectations. I think that’s the best chemistry we can have within each other, and among the ten of us.

S: It’s quite surprising how we bonded, even though we don’t really see each other very often, but I think we got to know each other pretty well.

J: Among the ten… plus two.. it’s just a really nice experience being around and doing this with them.

S: Especially the few of us who have been here from the start till now. I think we really gotten quite close.

J: Hope I don’t mix up the steps and hope I don’t drop her on the floor!

S: I hope I don’t trip on my heels and my dress… because… OMG. CATWALK!

Last question, anything you’d like to say to your block and your supporters?

S: Come for DnD! Have fun and don’t laugh at us! Ah whatever, if you want to laugh at us, go ahead and  laugh at us la lol.

J: To all that has supported us from day 1 till now, thank you for your support and we hope to be able to reciprocate your support on DnD itself.

Bonus Question! Jerrard you’ve taken up the Freshie of the year award, are you hoping to sweep up the next award this DnD?

J: If I’m like the Dark Knight, just sweeping out of nowhere! Sweep everyone off their feet.

S: He has already been sweeping off my feet. Like during the dance. Keep sweeping me up and down.

You did tell me that you’re able to take down a 110kg man.

Please don’t take me down. Lol.