It was a Sunday morning that I would usually have spent drooling on my pillow. However, having been assigned to cover the match, I forced myself awake and made the journey to the NUS field to watch our team face off against Sheares Hall. The lovely tan I received from the intense morning sunshine was just a happy bonus.

Before the match, I listened in on the talk that co-captain Evan was giving the team. “Keep it tight, don’t play like Arsenal!” just about summed up our approach to the game. It was to be a war of attrition, defending resolutely and frustrating our opponents into making mistakes.

Despite Evan’s instructions, KE suffered a couple of scares early in the game. Having won a corner, Sheares put in an in swinging delivery that left our keeper Jerrard stranded. It was through a combination of good fortune and inability of the Sheares players to react that the ball went narrowly past our right goalpost.

Soon after, a ball over the top caught our defence flat footed. However, instead of trying to bring the ball under control, Sheares’ striker opted to attempt a looping, Van Persie-esque header that went over both Jerrard and the crossbar.

It was clear by this time why Evan wanted the team to play conservatively. Sheares were technically superior to our players, and were demonstrating that comprehensively on the field by pinning KE back in their own half. However, our defence, marshalled by Kenneth, put on a dogged defensive display to repeatedly frustrate the opponents. For all their possession, Sheares remained unable to fashion a clear chance, and only managed a hopeful shot from distance that cleared the crossbar comfortably.

It was all well and good until the midway point of the half. Sheares caught our defence napping on the left, sending the ball to their winger who was unmarked. However, before he could send in a cross, Iqbal came flying in from midfield to clear the danger. 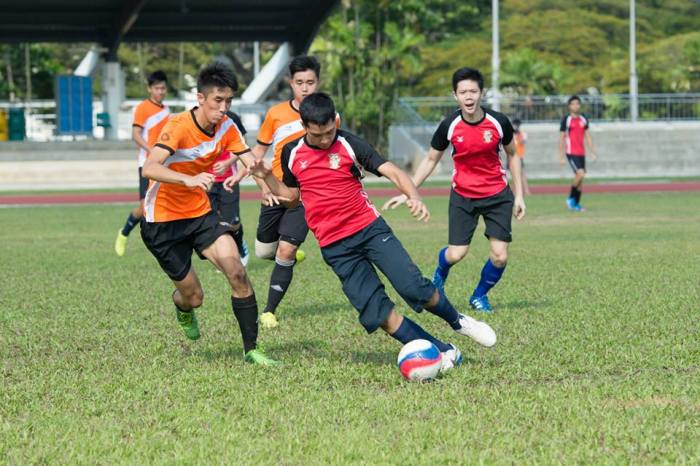 Minutes later, Iqbal was at it again, this time at the attacking end. Charging down the left flank, he skipped past a challenge from Sheares. However, the rest of the team were unable to get down the field quickly enough to offer support, and he found himself outnumbered and dispossessed as he approached the penalty area. From that move, Sheares moved swiftly down the field, culminating in a scuffed shot that came back off the post and into the grateful arms of Jerrard.

After that small flurry of action, both sides went into a deadlock in the middle of the park. However, the lull did not last long. Receiving the ball from defence, Junda attempted to play Sritam through from midfield. Despite overhitting his lofted pass slightly, Sritam made the most of the situation by harrying the keeper and forcing him to come out of his area to make a clearance.

Thereafter, Junda accidentally caught a Sheares player with a high boot whilst challenging for the ball. It was notable as the first foul of a remarkably well tempered match. However, not all players on the field were as sensible as they were even tempered. Late on, Sheares’ keeper elected to come charging out of his penalty area to attempt to clear a loose ball. However, the ball found its way to Iqbal on the left. Perhaps feeling a little too eager, Iqbal snatched at his shot from distance and sliced it well wide of the unguarded net.

Nearing the end of the half, a defensive mix up in our team allowed a seemingly harmless ball to bobble past them. Although we recovered sufficiently to clear the danger, Sheares punished us with the resulting corner, with one of their players heading in from close range to give Sheares a hard fought 1-0 lead going into the break.

The second half started off with Renwei coming on for Sritam. With the team being a goal down, KE started off with more attacking intent. Iqbal once again proved himself to be a useful outlet in attack, surging down the left flank before attempting a cross that was well blocked by a Sheares defender.

However, that early bright spell was about as good as it got for KE in the second period. A series of missed clearances from our defence allowed Sheares through on goal, and they made no mistake as a low shot was dispatched into the bottom left corner of the goal.

Having given themselves a two-goal cushion, Sheares visibly grew in confidence. This led some of their players to attempt some showboating in the middle of the park, with one of them pulling off a Marseille turn to get away from his marker. However, as Sheares poured forward in an orange wave, they were met firmly by the red wall of a KE defence that was determined not to concede again. 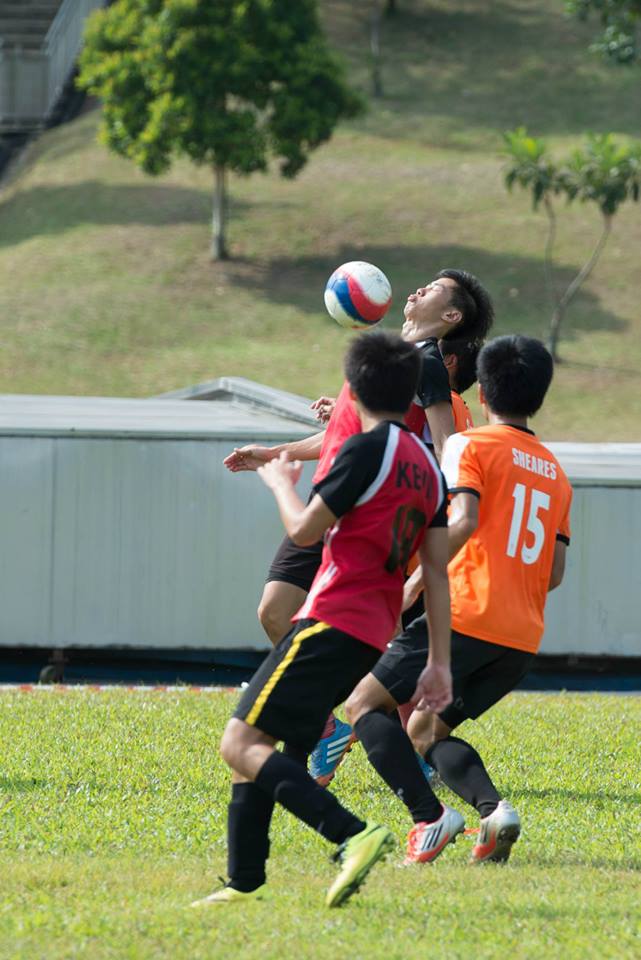 Our team were under the cosh, but still somehow managed to fashion a chance of our own. Having won a corner, KE played it short to a waiting Son, who sent in a good cross that Renwei connected well with. However, it was charged down by one of the many bodies Sheares had sent back to defend the corner.

If that chance had given KE a glimmer of hope of salvaging anything from the match, those hopes were quickly dealt a hammer blow as a lofted pass from midfield produced a two on one situation in Sheares’ favour. Although our covering player, Teddy, put in a commendable effort in trying to break up the attack, Sheares’ managed to get past him and tucked past a wrong footed Jerrard.

With that third goal, the outcome of the game was put beyond doubt. The previously frantic pace slowed down to something more pedestrian as the game ended with a 3-0 win to Sheares.

Nonetheless, kudos to the soccer guys for giving their bests!

All photos courtesy of KE vision