On 22/01/2015, our squash boys prepared what turned out to be an exhilarating and magnificent display of resilience and technique. The team did us proud by giving their opponents a run for their money and never giving up, despite losing overall to KR 1-4. From the perspective of a couch potato like me, here are a few things I learnt about squash from watching the game. 1)      Wiping your sweaty palms on the wall and glass doors is common practice. 2)      Moving out of the way for your opponent is equally important as running towards the ball. 3)      Be prepared to feel extremely embarrassed with your unhealthy physique while being surrounded by the players. 4)      Squash is equally a game of mental resilience as it is a physical one. I have nothing but great respect for our players. These are the results of the games:

Match 1: De Sheng (KE) vs Jun Wei (KR) De Sheng, the sole left-handed player on the men’s team, had a shaky start to the first game and lost to KR by 1-11. Nevertheless, if there was one player who managed to get the whole team laughing along with him that was De Sheng.  He maintained his optimistic mindset into the second and third game, showing a marked improvement in his swings and understanding of his opponent’s weakness.

Though faced with a player with more experience, De Sheng still played his best and injected some humor to entertain the team. The match was won by Jun Wei from KR.

Smile in the face of challenges

Match Tally: 3-0 to KR (11-1, 11-0, 11-1)   Match 2: Zhao Ming (KE) vs Jason (KR) Zhao Ming’s skills and capabilities are no secret and he did not fail to impress us. For the first game, he had a jittery start and seemed to be “a little nervous” in the game. However, Zhao Ming is no mere player as even with a nervous start, he quickly gained a lead of 6-1. Before I knew it, the game was already won 11-7. Indeed watching Zhao Ming play is not only a demonstration of excellent squash but also an entertaining exhibition of epic expression with every point won or lost.

Angling the shot with precision

If a nervous Zhao Ming won the first game, you could imagine how the second and third game proceeded when he was more calm and composed.  As you would probably expect, the subsequent games were easily conquered by Zhao Ming as he elegantly alternated between slow and quick swings while manipulating the space and angles in the squash courts superbly. The match was won by KE’s Zhao Ming.

Match Tally: 3-0 to KE (11-7, 11-4, 11-7)   Match 3: Weng Shian (KE) vs Felix Yeoh (KR) This match was definitely the highlight of the evening. Our Hall Master’s son, Weng Shian was up against the captain of the KR squash team, Felix Yeoh.  Here were two players who clearly understood the technicalities of squash and placed it to their full advantage. For the first set, it was impossible to tell who had the upper edge as they were both neck and neck with each point earned. Every point was well fought for through a long and exhausting rally. Weng Shian was not only able to return the hits from Felix but also managed to strategically counter them. On top of that, the players managed to manipulate the space and angles of the court very well. There was countless sprinting and diving just to return each other’s swing. Eventually, Weng Shian emerged triumphant and won the first set 11-9.

During the second set, it was again a display of exceptional squash by both players. It was intense and nail-biting for the audience as nobody could tell who would win the set. In the end, the set ended with a score of 11-9 to KR.

Balancing at what might seem as an impossible angle

For the third set, it began to show that Weng Shian had trouble sprinting and had to pause the set halfway. He had sustained an injury on his quadriceps and was unable to even walk properly. He carried on with the game but it was clear that the injury had cost him the game. Nevertheless, Weng Shian’s abilities in squash are admirable and it is a real privilege to have a player like him in KE. The match was won by Felix from KR. Match Tally: 3-1 to KR  (9-11, 11-9, 4-11, 5-11)   Match 4: Jia Nan (KE) vs Chong Kia Wei (KR) Initially nervous, Jia Nan took some time before he became more comfortable in the game. Faced with an opponent who had more experience than him, Jia Nan never felt intimidated and gave a good fight.

Jia Nan leaping for the shot

Despite losing the first set, he showed an improvement in his subsequent sets as he could understand his opponent’s moves better. With a positive mindset, he did his best and we cheered him on till the end. The match was won by Kia Wei from KR.

This time, diving for a shot

Match Tally: 3-0 to KR (11-1, 11-2, 11-6)   Match 5: Prof. Daniel J. MacAllister (KE) vs Chua Han Lin (KR) That’s right. At KE, we not only have KE Residents playing for IHG, but we also have our Hall Master’s family and our RFs playing for KE. Prof Dan not only has years of experience playing squash, he also displays true showmanship during the game. 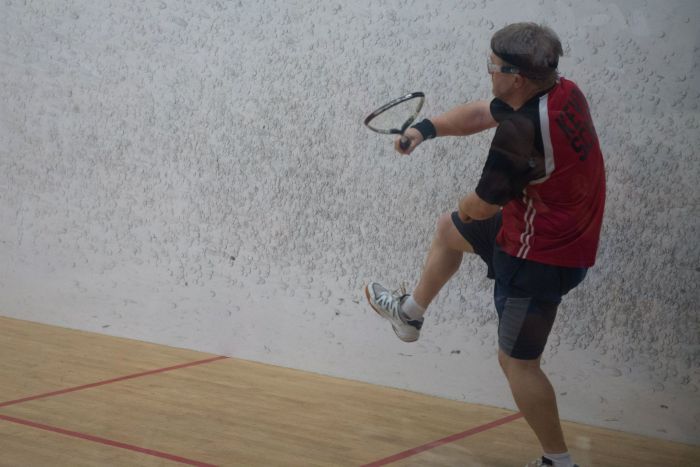 With his signature style of chewing gum while playing, it was a real treat for the audience to watch him play. Testament to this was the fact that he even got the supporters from the KR team clapping for him! KR took the first set by a marginal win of 11-9. This did not even slightly hamper Prof Dan’s jovial spirit and he fought strong to win the second set with 14-12. Prof Dan clearly had the upper hand in experience, but also his strength and stamina were equal to that of a person in their 20s. 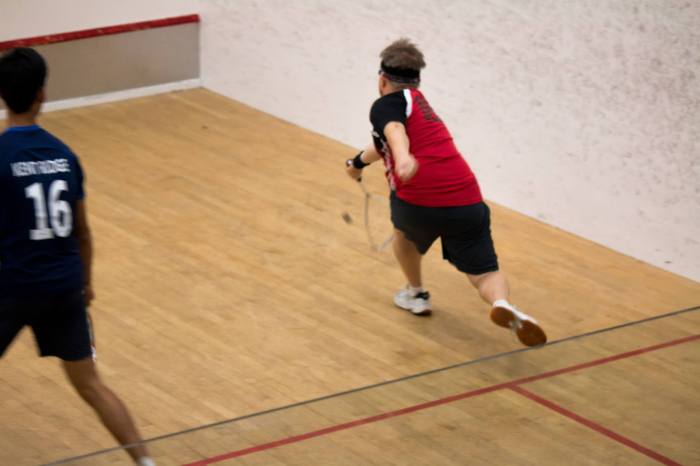 Shots like these don’t hamper Professor Daniel at all 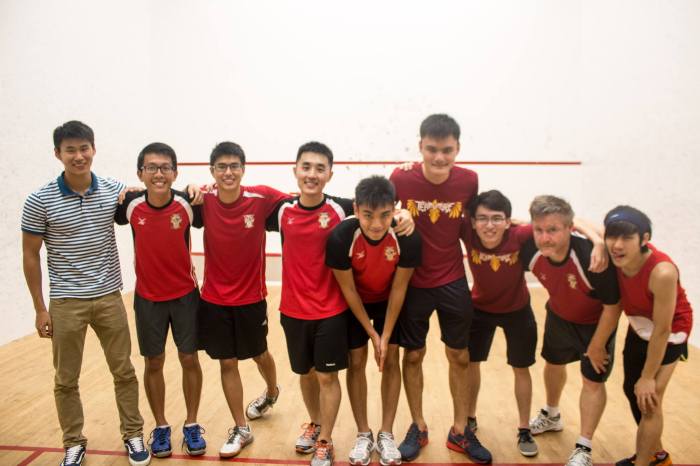 Our squash team is more than deserving of our applause